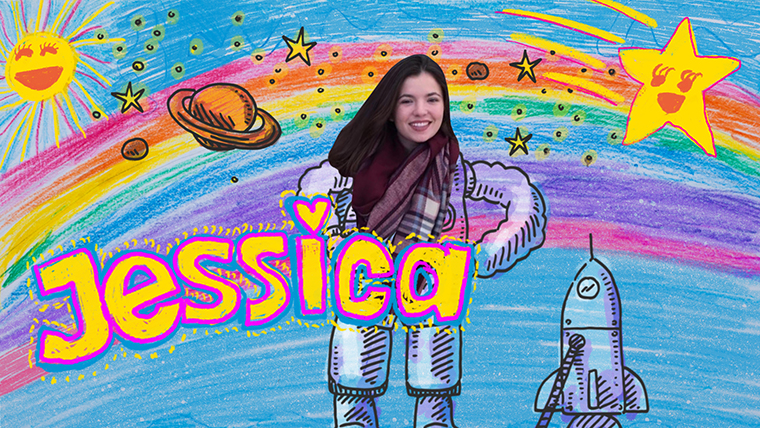 Jessica’s latest movie, “Not so long ago, In a place not far away,” is screening here.

For Jessica Henderson, there was no “before Today’s Family.”

It was this love of the organization that led Today’s Family to ask Jessica to operate an emergency home child care program in the wake of closures due to COVID-19. “I’m not going to lie, there were the first initial feelings of worry,” she said. “But something that is very important to me is community and serving my community. So, I got over the ‘what ifs’ and realized that this is a lot bigger than me and I needed to help.”

Jessica started her program in early April and ended the program when centres started to open back up in mid-July. Over the course of those months, she welcomed four girls into her home: a set of three sisters who were with her the entire time, and a ten-year-old girl who was with her for three weeks.

Jessica quickly recognized that, as hard as it was for her to operate a home child care program, it was a difficult situation for the children as well. When the three sisters initially arrived for the screening process, they were very unsure about their new environment. They also had trouble adjusting to the new hours that their parents had to work – getting dropped off early in the morning and being picked up later at night. “Some mornings they would be dropped off at 6am, and sometimes they wouldn’t be picked up until 8:30 or 9pm.”

So, she made great efforts to make the sisters as comfortable as possible. They would take their temperatures together at the beginning of each day, to make sure they wouldn’t feel scared by the thermometer. And Jessica borrowed cots from our Greendale location for the sisters to sleep on so they could keep their relatively normal sleep schedule on days where the parents’ hours were unusual.

Jessica received a lot of support from the parents, who were incredibly thankful that she was opening her home to a family of frontline workers. And she got a lot of help from the ten-year-old, who shadowed her and always jumped at the opportunity to help with tasks and guide the younger girls through activities.

But the biggest change came on their daily walks, when the sisters would notice signs of support for front-line workers on lawns or hanging in windows. “They would ask me what the signs said, and what’s an emergency service worker,” Jessica said. “And then we would talk about their parents, and what I was doing, and why they were in my home. By the end of it, they had a better understanding of what was happening, and what their parents were doing to help the situation that was going on in the world.”

Eventually, the sisters acclimatized to their new child care situation. Interactions with all three of them improved as they became more comfortable with Jessica. One shining moment for Jessica was when she caught the oldest sister expressing excitement at being allowed to “hang out with Miss Jess all day!”

“They understood that I was taking care of them so that their parents could take care of other people.”

Their parents were very thankful, as well. “There was appreciation shown every day,” Jessica said. “Every single time I would see them. They would express how thankful they were for the work that I was doing, and that they could have child care while working these crazy hours. I miss them so much.”

Even though she misses the four children, Jessica is incredibly proud of what Today’s Family empowered her to do. “The fact that we were able to open up to the community is how we shine,” she said. She loves Today’s Family as an organization that focuses on community, teamwork, and collaboration. “All of this shines through.”

And she looks back at this stint in providing home child care as a valuable learning experience. “One of the many things I love about Today’s Family is that there’s room for me to grow,” she explained. “And I feel supported while I am growing. There’s always someone to reach out to for help.”