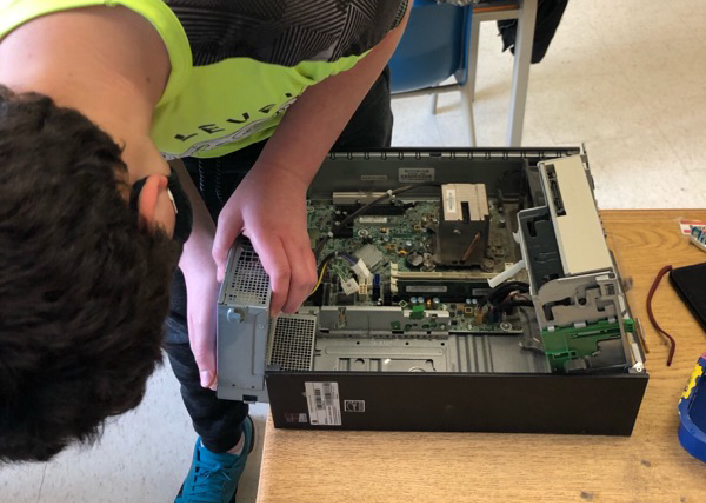 Technology has become a fundamental tool in how children learn in school, but it’s not often that children get to learn about technology and how it works. This week, we want to highlight a great moment from one of our Before and After School programs that created an incredible learning opportunity using technology.

It all began when one of the Early Childhood Educators overheard some children talking about the different parts inside of a computer. After contacting the Head Office, Mrs. Cassie was able to bring in an old tower desktop computer for the children to take apart and learn about. The children were immediately interested, mostly because they had never seen a computer so old!

Mrs. Cassie helped open up the computer’s casing to reveal all of the different components and wires that made the computer work. She then went to find a screwdriver, but by the time she returned, the children had been able to remove some of the parts using levers within the casing!

“I wonder what all of these components are?” Mrs. Cassie wondered aloud. The children dove into their own theories, using their knowledge of computers to make informed guesses about what each different part did. They were able to identify the power supply (which plugs into the wall and powers the computer) and the CD drive.

By far one of the coolest moments was when the children asked how old the computer was. “Let’s see if you can figure it out!” Mrs. Cassie said. The children put their heads together and, using a “Windows 7” sticker on the case, determined that the computer was probably manufactured in the late-2000’s.

The children spent the rest of the afternoon carefully cleaning the rest of the computer parts, occasionally unplugging things from the motherboard and Googling information on what each part does.

This story shows that learning strategies formed during “Early” Childhood Education do not lose relevance as children grow older – instead, collaborative exploration is just as useful for these grade-school children it was when they were much smaller. More importantly, the exercise will provide a springboard for other activities and learning opportunities, as the children can further explore and learn about how computers work and what each different part does.