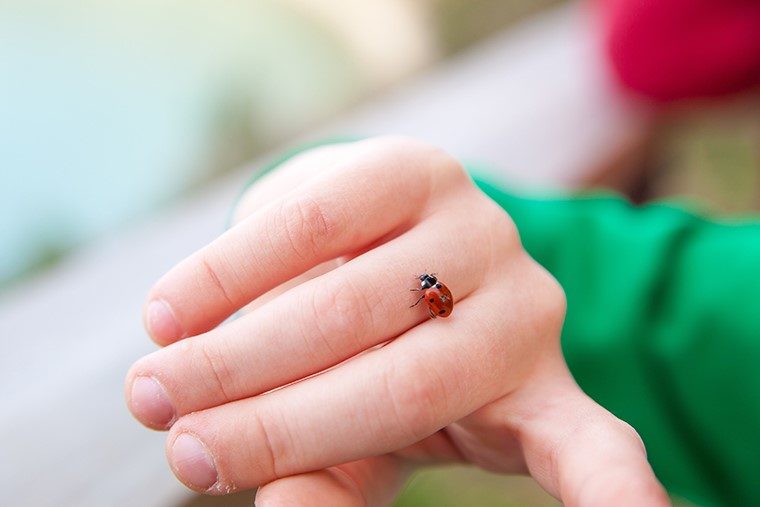 There are two kinds of people in the world: those who think that bugs are cool, and those that find them gross beyond belief. Which one are you? We’re not judging, by the way. We’re just curious.

But what if you wanted to help a child who thinks that bugs are gross change their mind? A good first step is to make them interesting.

That’s what our Early Childhood Educators found when they tackled this same issue, anyways. They found that several children in their full-day toddler program were interested in creepy-crawly insects, but there were also several who were decidedly not. The ECEs decided that they would see if young children’s natural curiosity was strong enough to get over their insectophobia.

The first step was to pick a bug that was not incredibly creepy. “That’s impossible,” some of our readers might be thinking right now, but even so, the ECEs eventually picked ladybugs for their experiment. “We picked ladybugs because they are kind of cute,” one ECE told us. “Children already know them and know that they won’t hurt them, either. Plus, we had a ladybug activity as well.”

The second step was to get the children interested. “Let’s watch a video together,” the ECE said to the children. They pulled up a short video about ladybugs on the centre iPad and watched it with the children. There were some scattered “ewwwwwws” in the audience, but not as many as initially expected.

Once the groundwork was laid, it was time to reinforce the learning from the video. “What colour are ladybugs?” the ECEs asked. The children correctly said that ladybugs are red with black spots.

“Who would like to make a ladybug with us?” asked the ECEs. Almost every child in the group raised their hand. The ECEs handed out paper plates and paintbrushes. They shared palettes of red and black paint and worked together to paint their own ladybugs.

As they were painting, the ECEs went around to each child and helped them to count the number of black spots on each ladybug. In this way, the ECEs were able to turn a short video on the iPad into a tactile activity that helped to teach colours, numbers, and develop fine motor control.

It’s still winter, so we won’t know if the children still find insects and bugs gross for a few more months. But even if they do, we can always make a new craft for them to enjoy!