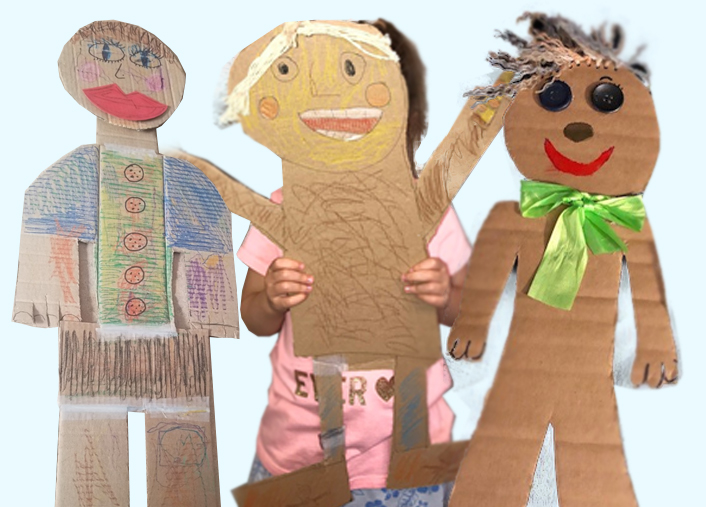 Brooke and her mom have become regular virtual visitors in our EarlyON Mother Goose program on Thursdays. They also join our circle time right after.

Circle time on Thursday has become a multicultural one. We have some families whose native language is Spanish and Today’s Family Early Childhood Educator Martha leads the circle time. She wanted to introduce some of the nursery rhymes she learned when she was little. That way, she could foster a better sense of belonging with families whose native language is Spanish.

One of the songs she introduced in circle time was Pin Pon. The song is easy to learn and is about a doll made of cardboard that likes to wash his face with soap and water. He likes to comb his hair with a special comb, and also likes to shake your hand.

To make circle time more fun, Martha made her own Pin Pon cardboard doll. This helped non-Spanish speakers have a better understanding of what the song is about. Also, using props helps everyone follow along in the song.

One day we had a big, beautiful surprise! Brooke joined us with an amazing Pin Pon doll that she made with the help of her big sister. When she showed us her Pin Pon doll, she was beaming with happiness and pride.

This made us reflect about the sense of belonging and the connectedness families feel when they join our programs! It was so exciting to see that Brooke made her own doll. It showed the engagement and excitement to learn a song or a language that is not her own. Brooke’s Mom has shown interest in learning Spanish, even saying a few words. And Brooke looks very happy and connected when we are singing in all languages (Martha sings in English, French, Spanish, and sign language).

A few weeks later, another child joined us in circle time. Last time he was there, he did not look very happy and left halfway into the circle time (we thought he was not pleased with the songs in Spanish). This time, his Mom shared that he understood a little bit of Spanish since his dad is from a Spanish-speaking country. To our surprise, when we announced that we were going to sing Pin Pon, he revealed that he had also made his own doll!

A sense of belonging refers to a sense of connectedness to others, an individual’s experiences of being valued, of forming relationships with others, and making contributions as part of a group. Belonging aligns with our program goals: positive and responsive interactions with parents and children builds positive relationships. These are all important aspects of child care.

Sing along! Here are the Spanish lyrics to the Pin Pon song, as well as the translated lyrics in English.

Pin Pon is a doll, very large and made of cardboard,
The face is washed with soap and water
Pin pon always combs with an ivory comb,
And although he pulls his hair himself, he does not cry
Pin Pon, give me your hand, with a strong grip
I want to be your friend! Pin Pon, Pin Pon, Pin Pon.